•Not all dragons actually have wings, though a lot of us have claws and horns!…. What are the characteristics of your wings? What kind of flying are your wings meant for… maybe gliding, swift flying, long distance flying, or even spatial flying? How do you like your wings? What about your claws? What shape are they? Were they used for any specific reason? How do you like them?…. Now for the horns! What do they look like? What kind of texture did they have? Did you use your horns for anything at all?….
<•>
•My wings are incredibly long, however I’m still adept at high speed flying and making incredibly tight turns. One would think that I would be slowed down by such large wings, though it’s quite the opposite. I have an incredibly fast reaction time upon home, and I know exactly how to use my wings for high speed flight, and extreme aerodynamics. I’m also able to make such tight turns since I use my stomach muscles also to help with those high speed changes in direction. Flying really develops the stomach muscles (despite the fact that my anatomy is completely astral). Since my body is made of pure energy, I don’t have limits, and I don’t tire. However I am obviously aware of how my high speed and nonexistent limits can affect others, so I’m very careful. I don’t want to hurt anyone. I cry whenever I hurt a worm or a bean….. My wings literally have the fabric of the celestial stars and the spatial realms within them. When one touches my light blue colored wings they are literally touching the stars…. However stars are incredibly radioactive, so I dull the effects completely. One can get burned though if they touch my wings at the wrong time…. especially when I’m pissy or a little too energetic. My wings are a mix between real bat wings and albatross wings, in terms of anatomy and shape.
<•>
•Now, as for my claws…. they are both rugged and very sharp at the point. They look almost like cloudjumper’s (httyd) claws, if I can give an example of how they look like. They are an obsidian black, and they never need to be sharpened. Actually, I don’t shed my scales, hair, “skin”, or anything really. I can’t sharpen my horns and claws, they just stay the same forever, which I don’t mind! Since they are incredibly sharp, I can slice through diamonds, steel, and literally any kind of materials. I can also easily climb things since I can get a strong hold on rocks and cliff faces. The claws on my feet are a bit thicker than the ones on my hands, though they have the same qualities….
<•>
•For the horns, they are light blue and gray in color, and they twist and turn in every direction possible. They are very sharp at the ends, though they were mainly used for marking things, (like one would with their claws), and for display. My horns are absolutely massive, and they do get in the way when I wander in the forest, so I use a certain kind of dimensional magic to allow my horns to pass through objects like trees, rocks, and vines. I don’t know exactly how I did it, though I sort of altered the physical aspects of the objects like trees and rocks, so they could allow my horns to pass through them. I need to figure out how I did this, lmao.

I have two long, black horns that hopefully help with intimidation. My claws are not very impressive, just enough to do the job I guess. But my wings... ooohhh my beautiful, streamlined, elegant wings. They allow me to dance through the water like like the aurora in the northern skies. Their span longer than my own body, from snout to tail, my powerful wings command the currents and demand respect from all observers. Oh how I long for the cool embrace of father neptune once more. I will now cease my reminiscing, for I grow nostalgic and regretful. Just know that my love for my wings is only equal to my love for the bounty of the sea. 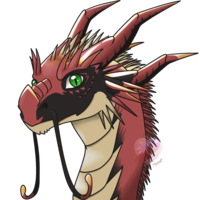 My wings were sturdy! I wasn't the fastest flier but with the right amount of experience I could make swift maneuvers and I wasn't easy to hit in the air.

I had two horns on each side of my head. I don't think they were really for any protection, territorial disputes, or hunting, since thy faced backward and didn't cover the important part of my head. They were likely more for a streamlined appearance?

My claws I wouldn't say are too special, they're thick enough to do some damage though. 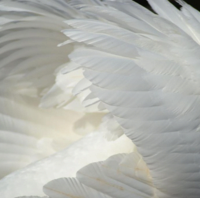 ooh man. my wings were pretty- white with scarce black dotting, feathery, slightly pearlescent, sleek and strong. i was basically a giant snowy owl, so i had a wing shape similar to owls and hawks, a passive soaring wing plan. i traveled long distances, up and down a cold shoreline and further inland into the forests, so it helped a lot. i was also decently agile, and surprisingly better on my feet than in the air, as my wings are pretty light and fold tightly into my body. i was still pretty good at flying and in-flight fancy maneuvering, but soaring was more of my thing

my back feet are thin raptorial bird feet, so the claws on them are extremely sharp, smooth, long and curved. the claws on my front feet are less curved and shorter, but still fearsome weapons and good for grasping things. good for scritches too

my horns are sort of weird? they probably weren't especially lethal, but very heavy and just sharp enough to do some damage if i decided to swing them at you. they were like typical dragon horns, but divided into sections and had antler-like protrusions off them. they were probably used for display or another form of defense, i'm not sure. if i did use them, i think they'd work something like deer antlers or triceratops horns; i would just charge or swing my head around a lot. hella whiplash, though

My wings changed as I got older. When I first started flying, my wings were really made for aerobatics. I could turn tight, gain altitude fast, and twist and dive and weave like mad. As I grew older, my wings grew larger and larger, making me less agile in the air but giving me greater stamina for long-distance flights. I could glide effortlessly, I could climb in altitude very easily, and I was very stable in the air.
Overall, I like my wings as they were in both their stages. Being quick and agile was loads of fun as a young dragon, but as I grew older I also lost as much interest in being a daredevil. You might say my wings developed to match my personality.
My claws were pretty big. They were shaped sort of like a cross between a raptor's hooked beak and a a raptor's talons. They took up a lot of space on my paws, about the equivalent of the last two and a half segments of a human hand's fingers. I had four toes on each foot, and a dew claw on each front foot that was much more like a cat's claw than the others. They were mostly designed for grip. I could dig them in to even a lot of rock surfaces, and because they were so large and tough, they rarely broke or cracked. I could dig them into a field for an emergency quick landing and leave deep furrows in the ground similar to what a plough would do. As a hatchling, I used them a lot for hunting, much how a big cat will jump on it's prey and hook it's claws in to hold it. After I learned to fly, I used my claws mostly for grip and stability, as they were so big I could split my prey open by accident if I tried to grab it in a paw. I like them overall quite nicely. Sometimes I wish I had had more dexterous claws and paws, like some dragonkin do, but in the end I would prefer the strength of mine to the dexterity others have, as it's what I'm used to.
My horns were pretty smooth, with slight ribbing up the length of them due to them growing in spurts. They grew right out of my skull, so they were very strong. They were mostly decorative in the era I lived in, but historically dragons with horns like mine would do well in battles over territory or mates because the horns protected the most delicate parts of the spine.

My wings were purple, blue and sort of spotty. They started an ultramarine blue at the top, and fused into a warm pinkish purple towards the bottom, with blue spots fading into the purple and mixing together. My brother's were the other way around colour-wise.

We grew wings when we came of age, at around 18 years old. Wingspan could vary, it wasn't uniform in proportion. Mine were adequate, but I wasn't a good flyer until I had to teach my brother to fly. That motivated me to learn myself.

My brother was an amazing flyer though. His wings were definitely bigger. Especially in the "forearm" part of the wings. He was a much better flyer than me, for various reasons. Passion and talent, wingspan, his small size making him more aerodynamic, his hard life in the wilderness wandering from country to country. He was born to fly.

Vilaxian architecture was build differently from human architecture because of the wings. Especially wherever you slept. A Snow Dragon's wings could move about while asleep, making life in confined spaces particularly uncomfortable. I think there was a definite collective feeling of claustrophobia about us. Something instinctive.

Me and my brother had horns which could glow in the dark, at will. There are purple and blue veins in them, connected to nerves with a natural bioluminescence. They were very smooth, without any ridges. They weren't that long, and arced back like a goat's horns.

Claws were retractable, except for the "thumb" claws on each foot.

We also had eyes which could glow in the dark, at least somewhat. And we had some sort of bioluminscent paint on our cheeks. "Freedom markings" we called it. I think it was applied by scratching it into ourselves with our claws, which would have hurt. But once it healed they could shine and glow too. Sort of like high-vis clothing.